I recently discovered an awesome new recipe that is a simple twist on an old standby… ice cream.  Everyone always loves ice cream, especially in the summer, right?!  Well, I found this great variation via The Kitchn.   It calls for layers of lemon zest, olive oil and sea salt between layers of ice cream.  What is great about this recipe is that it is so versatile.  You can use frozen yogurt or change up the toppings to suit your taste.  You can make it a winter treat by using cinnamon, nutmeg, berries or vanilla extract. Think of herbs, spices, citrus, or fruits.  Also, it’s gluten free!  Another great option is to use some balsamic vinegar between the layers.  However, my favorite so far is the combination of olive oil, sea salt and lemon zest with vanilla ice cream!  I made this when my mom was in town over the Easter weekend as a post brunch dessert, and it was such a hit!  What makes this perfect for parties is that you can make it in advance and just pull it out of the freezer when you are ready to serve.  I served them in tiny mason jars which held a good amount for a single serving.  I cannot wait to try out some different variations on these.

While I was in Morocco a few months ago, I attended a cooking class in Fes.  Over the course of about 7 hours, we made a chicken pastilla, harira soup, beet salad, and almond macaroons.  Everything was so delicious, however the macaroons were heavenly!  We bought fresh almonds, boiled them, took their skins off, and then had them ground into a paste by the local baker who had a huge food processor / grinder.  Then we made them into macaroons with the following recipe:

Preheat oven to 350 F (175 C).  Beat eggs with the sugar.  Add butter, oil, baking powder and lemon zest.  Mix well.  Stir in the almonds.  Add the semolina and mix to make a moist, crumbly dough which is firm enough to shape into balls.  Wet hands (in Morocco we used orange flower water to keep hands moist which left a subtle orange taste) and take enough dough to roll a small ball.  Squeeze the dough and then form a ball.  Flatten it slightly to form a thick disc.  Roll the disc in powdered sugar and place onto a lightly oiled baking tray. Bake the cookies for about 20 minutes or until golden brown..  Transfer the cookies to racks to cool.

I recently tried recreating this recipe at home.  I substituted flour for the semolina.  I made my own almond paste by processing almonds and adding some sugar, but I also bought some pre made almond paste which I added.  The texture to aim for is almost like marzipan.  I made a rookie mistake however and set the oven to 175 F (I failed to convert the 175 degrees Celsius to Fahrenheit).  Once I noticed that the dough was not crisp enough, I increased the temperature slightly, but I was still unable to recreate the crispiness of the macaroons I had in Morocco.  Mine turned out more like cookies instead of macaroons, but even though the texture didn’t quite work out, they were still so delicious!  They lasted maybe a day and a half before they were all eaten.  If you try out the recipe, let me know how yours turned out!

I know this is after the fact, but I wanted to share some pictures of how my Easter eggs turned out.  My mother came into town, and we tried a new method of egg dying, which I had come across both in Remodelista and in The Kitchn.  I know there are a zillion different ways to decorate Easter eggs, but I really liked the idea of using natural dyes from vegetable scraps.  We decided to use yellow onion skins, red onion skins, beets and carrots.  We first boiled water in separate pots and then added the vegetable scraps and simmered for about 15 minutes.  We eventually threw out some of the water, so that the color was more concentrated.  Then we cooled the dyed water until it was room temperature.    We used rubber bands to create patterns on the eggs.  Finally, we added the eggs and set in the refrigerator overnight. I love how natural and rustic the colors turned out.  Next year, I think I want to try natural dyes from flowers!

A salad could very well classify as my favorite meal.  They work for me anytime of the year – winter, summer, rainy, sunny.  Now that the weather is getting warmer though, I thought it would be fun to post some links with tips to spice up your salads. 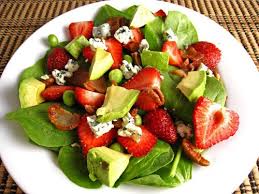 The Metrocurean, a great guide for any DC foodie, posted some suggestions on how to mix up the typical salad.  TheKitchn, from which I get some of my favorite recipes, and an affiliate of Apartment Therapy (love!), recently posted some creative alternatives to the typical salad with greens.

Last fall I went on an awesome trip to the Pacific Northwest.  I spent time in California and drove up the coast to Portland.  I really enjoyed everything that part of the country had to offer – great weather, drive through coffee shops, gorgeous vistas, and of course lots and lots of red wine, beer and great food!  When I got back home and eventually returned to reality, I decided it was time I try a detox of

sorts.  So I signed up for a two week detox offered by my local yoga studio.  Although not technically qualifying for it, it seemed pretty close to a vegan diet.  By about day three, I realized it would be a lot more difficult than I originally thought, and I even considered myself a very healthy eater beforehand.  However, by the end of week two, despite cheating a few times, I felt great!  Since then I have taken some of the lessons I learned during the detox and have tried to incorporate them into my daily eating habits.  For example, I try not to eat red meat more than once a week; my diet is primarily made up of vegetables, raw when possible; I never drink sodas; and I try to seriously limit my intake of processed foods and hydrogenated fats.  One resource that really helps me do this is nutritionist Kimberly Snyder’s blog and her frequent email tips. Every time I read her emails, I learn something surprising.  For example, I always thought agave syrup was a good substitute for honey and other sweeteners, however, it turns out that it is a highly processed sweetener which has been converted into almost pure fructose!  Who knew?! Even if you are not ready to commit to a full fledged plant based diet (which I am not), it’s easy to start incorporating some of her helpful advice into your daily habits.